12.06.20 Anglers Face Lock Out from Highly Protected Marine Areas in Report to Parliament 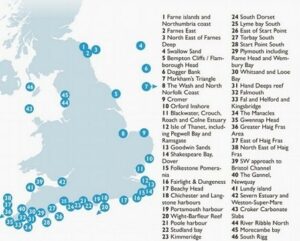 English recreational sea anglers face being locked out of some of their favourite fishing marks if Ministers implement the recommendations contained in the Benyon Review of Highly Protected Marine Areas, published this week.

In spite of recognising the of benefits of recreational sea angling and the economic importance of the trade which supports it the Review Panel did not include anyone with a detailed knowledge of the sector or from the tackle trade. Consequently, low impact recreational angling was treated as being equivalent to damaging industrial trawling, dredging, and drilling.

With 46 possible sites identified in the report as candidates for a network of new Highly Protected Marine Zones covering up to 10% of English seas, anglers could see themselves no longer able to fish in many popular places around the English coast. (See the map)

The Review, chaired by Richard Benyon, a former Fisheries Minister, acknowledges the existing network of Marine Protected Areas, each of which offers protections for a designated feature or habitat within its boundary. The proposed Highly Protected Marine Areas would go further:

‘…by taking a ‘whole site approach’ and only permitting certain activities within their boundaries such as vessel transit, scuba diving and kayaking. Activities that could have a damaging effect on habitats or wildlife, including fishing (both commercial and recreational), construction and dredging would be banned. The Review claims the introduction of such areas could lead to a significant biodiversity boost for our seas by giving our marine life the best chance to recover and thrive’.

In its evidence to the panel, the Angling Trades Association highlighted good practices from around the world where far from excluding recreational fishing many marine protected areas are actually designated as recreational only zones in acknowledgement of the light impact that rod and line fishing has on fish stocks when compared to commercial netting or trawling. Furthermore, the presence of sea anglers in these zones serves to provide a system of enforcement and monitoring which would otherwise be largely absent.

Mike Heylin OBE, Vice Chairman of the ATA, who prepared the ATA response to the consultation prior to the report being prepared, said:

“The Angling Trades Association welcomes the rebuilding of fish stocks and plans to reduce the destructive power of industrial fishing through trawls and invasive technologies. We are disappointed that no recreational angling or tackle trade representatives were appointed to the Benyon review panel. Consequently no distinction has been drawn between the low impact of rod and line angling and the devastating effect of massive trawls on the marine environment and stocks.

“Recreational anglers are the eyes and ears of the environment in salt waters as well as in freshwater. If they are in these HPMAs they can report transgressions and help ensure compliance to prevent abuse which is reported to happen in MPAs at present. Locking anglers out of these zones will actually damage rather than improve the opportunity to deliver successful marine protected areas.”

“Recreational sea angling is worth about £99 million a year turnover to the tackle industry, and the secondary and tertiary expenditures for sea angling trips will add about another £150 million to that sum each year.”

“Protecting the environment is absolutely necessary but not at the expense of excluding those who have fought hardest to defend those environments. For generations anglers have wanted controls on the most damaging industrial processes in our coastal waters and suddenly we are simply bundled up with dredgers, trawlers and drillers.”

NOAA paper on marine protected areas in the USA

Join the Angling Trades Association and become part of our influential body, dedicated to supporting the tackle industry and promoting the wider angling agenda that is so important to us.

The voice of the British